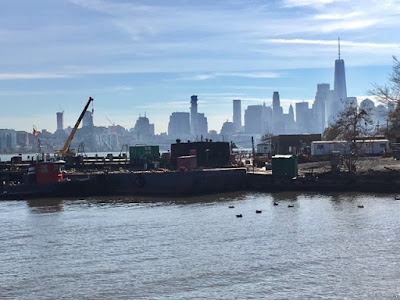 This is from 6th Ward Councilwoman Jen Giattino who teamed up with Tiffanie Fisher to send out this message to Hoboken residents. Both Tiffanie and Jen voted for the right for Mayor Zimmer to use emminient domain as a tool to potentially acquire Union Dry Dock while Mayor elect Ravi Bhalla voted present in the same vote. If you should ever question advocacy look to this vote to see who supported this vote and who was potentially conflicted out. 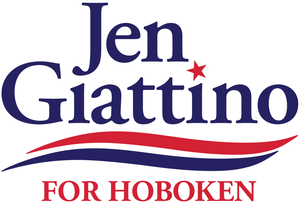 Since 2011, I have been advocating to complete waterfront public park in Hoboken with the acquisition of the Union Dry Dock property. Most recently, I co-sponsored the resolution to add UDD to Hoboken's Open Space Plan, and then supported giving the administration the ability to use eminent domain as a tool to help facilitate the acquisition of the site.

Like many of you, I was surprised and dismayed to see that NY Waterway have been negotiating for months with UDD culminating in their indication of having recently acquired the site with the intent to move their fleet operations to the site. These operations will include storage of 20 ferries, refueling and maintenance for their entire fleet of 34 ferries, and potential for maintenance for their bus fleet which will bring increased traffic and environmental risks to an area that is surrounded by residential and recreational use.

I wholly support an expansion of ferry service for Hoboken and other NJ residents. But I feel that NY Waterways operations should be located elsewhere and that there should be a public process involving stakeholders to determine this. If you agree, then please help me advocate for this by sending a letter today (via mail) to the Department of Environmental Protection and tell them this. NY Waterway (along with UDD and NJ Transit) submitted an application on 11/14 for a provisional waterfront permit that will allow them to quickly set up operations as they exit their facilities in Weehawken.

To make it easier, below is a template you can use and edit before sending. Letters should be sent no later than today (11/28) if possible. I have also attached shown below a letter that 2nd Ward Councilwoman Tiffanie Fisher and I will be jointly submitting to the DEP urging them to deny the application. The UDD site sits in the 6th ward and the residents of the 2nd ward include many that are most directly effected every day. Tiffanie has been advocating for our public waterfront for several years and when she was elected in 2015 joined me in meeting with local residents and Fund for Better waterfront to continue advocacy for UDD.

Please consider sending a letter. If you would like to send, but do not have a printer, envelope or stamp, please let me know. We will offer to bring a letter to you tonight or pick one up from you with a plan to put a bundle together and send out tomorrow. Thank you for your advocacy on this important issue. Please let me know if you have questions or would like to see the entire DEP application - it is large so will need to be sent separately.

As a resident of Hoboken and someone who enjoys Maxwell Park, the Castle Point Skate Park, the Hoboken Cove Boathouse and uses the public access adjacent to Union Dry Dock, I urge NJDEP to reject the above referenced waterfront development permit application. This request from NY Waterway in partnership with NJ Transit is disingenuous, intentionally disregarding a 2012 agreement made by NJ Transit to not pursue the Union Dry Dock property for this use case. In 2012 NJ Transit clearly stated they “look forward to continuing to work with you [Hoboken Mayor Zimmer] as we continue to advance efficient, environmentally sound transit options for your residents and all the citizens of NJ.”

This proposal is anything but environmentally sound creating new environmental risks and quality of life issues for Hoboken. For more than 25 years residents, public officials and nonprofit organizations have invested tens of millions in public and private funds to redevelop the Hoboken waterfront. The city is extremely close to completing the vision of a contiguous public park along the Hudson River’s edge. This application jeopardizes all the progress the city has made to date and is grossly incompatible with the new development taking place along Hoboken’s waterfront. The proposed use is prohibited by local zoning laws and is in violation of the State’s Coastal Zone Management (CZM) Regulations.

In consideration of this, I ask that you please:

1. Deny this irresponsible application and hold an open public process to collect information from all stakeholders and discuss additional locations for NY Waterway to house their ferry maintenance, storage and refueling facility. The ferry system is an integral part of our mass transit system. We request a thorough examination of alternate sites and transparency in the process. It is our understanding Bayonne’s industrial waterfront has actively sought NY Waterway for years and in addition there are other locations owned by NJ Transit that are more appropriate and affordable.

2. Respect the current uses of the Hoboken Waterfront in vicinity of the Union Dry Dock site. Enjoyed by both residents and visitors there is currently a popular fishing pier, a skateboard park actively used by children of all ages, kids playground and swings, large grass lawn and a boat house including a natural sand beach to allow for free activities including kayaking. It’s an understatement to say a ferry refueling, repair and storage operation for 20 -34 ferries would be environmentally unsound and could destroy the opportunity for visitors and residents to fish, kayak or enjoy the public waterfront. In addition 20-34 ferries coming and going (using tier 1 diesel engines) and storage of large amounts of fuel would be a vastly different use case than Union Dry Dock currently operates creating new environmental hazards.

4. Honor the 2012 NJ Transit decision to not pursue this proposal. New Jersey Transit Executive Director James Weinstein soundly rejected NY Waterway’s 2012 proposal in writing to Hoboken Mayor Zimmer “this is to confirm that New Jersey Transit is no longer exploring the acquisition of the Union Dry Dock property nor does the agency anticipate doing so in the future.” Thank you so much for your consideration,