In light of the Hoboken election results with the Mayoral winner Ravi Bhalla only getting 33% of the vote due to the elimination of the runoff, there has been discussion of returning to the runoff elections for municipal contests. Another option is the instant runoff which requires no extra elections. 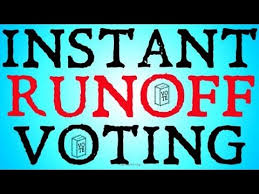 The organization Fairvote.org has an option for voting reform called Ranked Choice Voting or Instant Runoff Voting. The link is here explaining the concept: http://www.fairvote.org/rcv#rcvbenefits.

There is a new Facebook Group Hoboken Residents For Election Reform which has just been formed and already has 120 members. Of course not everyone will support this concept as to be expected. This change can happen for the 2019 Ward Council races either by ordinance or ballot initiative.

What is not clear yet if the ability to do Ranked Choice Voting has been made legal yet in New Jersey. There was an initiative in the NJ legislature but as of this writing it is not confirmed by this author if it has passed.

Here are some features of the instant runoff concept:

Promotes Majority Support With ranked choice voting, if no candidate has more than half the vote in first-choices, candidates finishing last are eliminated round-by-round in an instant runoff until two candidates are left. The winning candidate will be the one with majority support when matched against the other. In a multi-winner election, ranked choice voting promotes majority rule because the majority of voters will always be able to elect a majority of seats, without fear that an entrenched minority has used gerrymandered districts to ensure they stay in office.

Discourages Negative Campaigning In non-ranked choice voting elections, candidates benefit from “mud-slinging” by attacking an opponent’s character instead of sharing their positive vision with voters. With ranked choice voting, candidates do best when they reach out positively to as many voters as possible, including those supporting their opponents.

Provides More Choice for Voters Too often, to avoid “vote splitting” in which candidates can and do win with very little support, efforts are taken to limit the number of candidates who compete. This limits voters’ choices. In some places, that means a low turnout primary election eliminates most of the candidates; in others it means restrictive ballot access laws keep out challengers; and in others it means that candidates are shamed into staying out the race. Ranked choice voting allows more than two candidates to compete without fear of splitting the vote.

Minimizes Strategic Voting Voters should be able to vote for candidates they support, not just against candidates they oppose most. Yet in elections without ranked choice voting, voters may feel that they need to vote for the “lesser of two evils,” because their favorite candidate is less likely to win. With ranked choice voting, you can honestly rank candidates in order of choice without having to worry about how others will vote and who is more or less likely to win.

Mitigates Impact of Money in Politics Too often, candidates win by barraging opponents with a slew of expensive, negative ads, rather than building a positive, grassroots campaign for support. Candidates who have run and won in ranked choice voting elections have been successful because they built grassroots outreach networks. Those more positive and inclusive campaign tactics cost less than polarizing negative radio and television elections, helping to explain why candidates seem able to win ranked choice voting elections even when outspent.

Saves Money When Replacing Primaries or Runoffs Many local offices are elected in two rounds of elections; either a primary winnowing the field to two followed by a general election, or a general election followed by a runoff if no candidate has a majority. In either case, the election that takes place outside of the context of the general Election Day often suffers from very weak and unrepresentative turnout, while raising issues of vote splitting in the first round and the possibility of disenfranchising overseas and military voters. Ranked choice voting can accomplish the benefits of a primary/runoff election structure with only one election, avoiding these issues while saving the jurisdiction the costs of running two elections. That's why ranked choice voting is often called "instant runoff voting" when used to elect mayors, governors, and other single-winner offices.

Promotes Reflective Representation Compared to winner-take-all elections, ranked choice voting in multi-winner contests allows more diverse groups of voters to elect candidates of choice. This promotes diversity of political viewpoint as well as diversity of candidate background and demographics. Even in single-winner races, ranked choice voting can promote the representation of historically under-represented groups like racial and ethnic minorities and women.
Posted by Hoboken Resistance at 8:49 PM