Last night the NHSA Board approved unanimously 9-0 the preliminary 2018 Budget for first submission to the State of NJ for comment. The budget is flat compared to last year with $52,593,032 in Revenues and $50,737,897 in Total Appropriations. The good news is that for rate payers there is no rate increase projected for this year. The annual facilities charge is projected to go up only $4. The long term trend is that usage overall for municipal sewers is averaging about 1.5% less every year due to more efficient appliances, demographic changes in household sizes, and smaller capacity toilets that are driving consumption down in spite of recent development in the area.

Keep in mind this is the preliminary budget but if this should hold up it is good for ratepayers in all 4 cities served by the NHSA.

The North Hudson Sewerage Board serves Hoboken, Weehawken, Union City and West NY communities. Each city has two appointed commissioners except Hoboken which has three. The current Hoboken commissioners are Kurt Gardiner (myself), Brian Assadourian and Ed Friedrich. 7 votes out 9 are required to pass any resolution so Hoboken does have veto power but has not used it since I started my five year term in February of 2016.

The contract for Executive Director Richard Wolf was also extended for another 5 years and unanimously passed by the board. Richard Wolf has done an excellent job with his execution and stewardship over the years and is a key to continued success of the Authority. As long as Richard desires to continue and is able to work there he will continue to have support from all the major stakeholders. All three Hoboken commissioners including Mayor elect Ravi Bhalla were in agreement in the contract extension and see him as a key to getting the third pump completed at the BASF site which will further help alleviate flooding and remain in CSO compliance for the Authority as a whole.

I did receive a call from Mayor elect Ravi Bhalla before the NHSA meeting last night. He expressed his support for the contract renewal. We also discussed our shared goal of seeing the third wet weather pump in Hoboken which will be funded by the Sewerage Authority but of course require cooperation from the Bhalla Administration in terms of integrating into BASF Park Design. Also discussed in the 9-11th and Madison Sewer Collection Improvement Project which will get out of design phase in February of 2018. I hope to continue to have a professional working relationship with Ravi with respect to these infrastructure initiatives.

NHSA Debt is down:

Through a program of graduated defeasance The Authority has paid down its debt. In 2013 that debt was $443 million and in 2017 it is down to $394 million, a reduction of $49 million in just 4 years.  Additional pay down of some debt in 2018 is expected to continue. The NHSA won't know the exact figure for 2018 defeasance until the budget is completed. 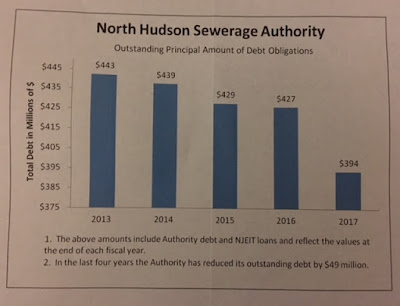 Posted by Hoboken Resistance at 5:55 PM