Just two days after both Councilwomen Jen Giattino and Tiffanie Fisher sent out a communication urging residents to oppose the Union Dry Dock application to the NJ DEP application, the Zimmer Administration has followed suit and released this update: 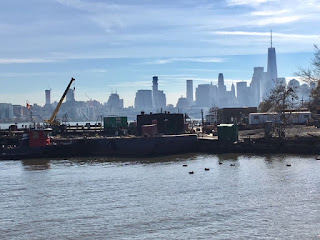 After an evaluation by legal counsel, the City of Hoboken has provided formal written feedback to the New Jersey Department of Environmental Protection (DEP) regarding NY Waterway’s application for a provisional permit at the former Union Dry Dock site.

In a joint letter, Mayor Zimmer and Mayor-Elect Bhalla urge the DEP Commissioner to deny the application and ensure that the “entire transaction be fully evaluated in the light of day with full transparency for all interested parties. Unfortunately it appears as though the transaction has so far been conducted in a manner that appears intended to hide information from the public and from the City of Hoboken.”

The full letter from Mayor Zimmer and Mayor-Elect Bhalla along with a review of legal issues can be viewed at: www.hobokennj.gov/docs/mayor/Letter-Zimmer-Bhalla-DEP-NY-Waterway-Permit-11-28-17.pdf.

NY Waterway’s DEP permit application can be viewed at: www.hobokennj.gov/docs/NJDEP-Waterfront-Development-Permit-Application-NY-Waterway.pdf.

Editor's Note: The Zimmer Administration calls for transparency on the Union Dry Dock but did they know about this transaction before the election? It's a fair question to ask. Keep in mind for years Dawn Zimmer had the opportunity to negotiate for the purchase of the property but did not make it a priority. Now it appears to be a priority but it seems more like a face saving operation at this point for the lame duck Mayor. Share your thoughts below.

Posted by Hoboken Resistance at 1:35 PM