Last night at the Hoboken City Council meeting, the potential use of eminent domain to acquire the Union Dry Dock property was approved 8-0-1. The lone abstention was Councilman Ravi Bhalla who has also recently recused himself from potentially voting on the Suez contract due to his extensive legal connections.

This vote merely allows the current Administration and the Mayor elect to pursue negotiations with either NY Waterway or NJ Transit with the option to exercise eminent domain for leverage. A separate vote would be required to actually acquire the property should direct negotiations fail. 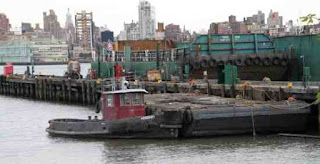 The proposed use by NY Waterway is a bus depot and ferry repair station. A number of residents spoke out against the usage of that site in terms of traffic pollution and the obvious loss of aesthetics. It was mentioned that there are other potential sites in the area including Bayonne and Jersey City.

Editor's Comment: Eminent domain should always be a method of last resort. However, I thought in this case the City Council was reasonable in allowing the Administration the tool of eminent domain to use as leverage to keep the cost of acquisition in check based on current zoning evaluations or fair value. This leverage could save the taxpayer money should the purchase go through either way.

There are potential pitfalls to this and one of them is price of at least $11.5 million which was the price paid by NY Waterway. Additionally, it was revealed at the meeting that NJ Transit’s Eminent Domain authorities trump Hoboken’s (pun intended). This means if Hoboken is successful in acquiring the parcel, NJ Transit could then acquire it from Hoboken which is not good.

Posted by Hoboken Resistance at 12:59 PM