Recent ELEC filings from the Ravi Bhalla for Mayor campaign indicate local political blogger Nancy Pincus who runs the Grafix Avenger blog was indeed paid by the Bhalla campaign. This was for work rendered during the election but paid out after the election on November 13th 2017. It does not appear that Nancy Pincus ever disclosed to her readers that she was a paid political operative of the campaign during that campaign. Three ways to lose leadership fast as a local political blogger is to either dupe them, be disingenuous, or outright insult your readership or segments of it and it appears that Nancy Pincus has hit the trifecta this election cycle.

The latest ELEC filings from the Bhalla campaign indicate that the payment was made on November 13, 2017 in the amount of $1,200 for "printing literature,handouts- flyers/palm cards,design of palm cards." 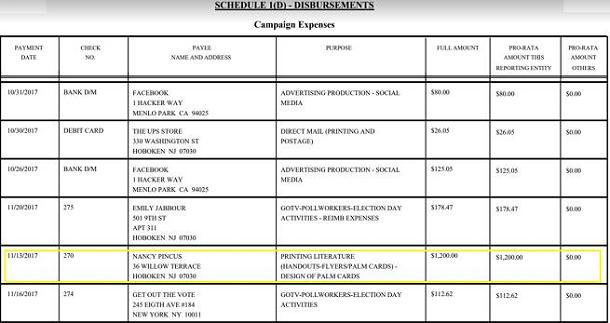 Nancy Pincus who runs the website http://grafixavenger.blogspot.com had previously denied working for any campaign as a political operative. Shown below is her posting on Facebook using the handle Gee Aye denying what based on the information above is clearly untrue. Nancy Pincus commented "I don't/never had worked for or any campaign or candidate. The opinions I express are my own. It's a matter of opinion whether they help or hurt any candidate I advocate for or against. Been doing it for 7 years now."

The fact is that Nancy Pincus was indeed a paid political operative for the Ravi Bhalla campaign and appeared to never disclose that fact and doubled down by denying it on Facebook. Readers of political blogs expect bias in their stories but the failure to disclose this information from her readers will impact her reputation going forward.

For reference and context below is Ravi's most recent ELEC showing in excess of $458,000 in expenditures. If you add the $70,000 from Stronger Foundations developer PAC that means Ravi was close to raising well over a half a million dollars to win just 32.75% of the vote.  The moral of the story is that going forward in Hoboken, you better be willing to raise over $500,000 to get elected Mayor.

As editor of the Hoboken Resistance and Advocate I feel it is an important function of being honest about who you support and don't support running a political blog. I did in fact donate $500 to the Jen Giattino campaign and volunteered to get the word out. I did not get paid to specifically work on her campaign but if I had I would have disclosed it.

I feel that is was a grave mistake for Nancy Pincus to not disclose her involvement and payment from the Bhalla campaign and as a result her tumbling credibility will suffer even more. It is a mess of her own making as well as the conduct of the Ravi Bhalla campaign that went "scorched earth" on reform. To this day Nancy Pincus is not just going after politicians but supporters of other candidates with a viciousness that surprises even me after following Hoboken politics.

Now that we know Ravi has paid Nancy for her work, Mayor Elect Ravi Bhalla owns every vitriolic swipe, half truth, and flat out untruth that comes out of this bully blogger beast's forked tongue. Good luck Ravi trying to coral this loon unless of course you are signing off on every deranged post and comment. So much for the effort to unify. You paid for it, you own it.
Posted by Hoboken Resistance at 9:44 PM