At the behest of the The Hoboken Chamber of Commerce earlier this year, the City of Hoboken set aside $50,000 for new holiday decorations for this year. The new lights can be seen on Washington Street as of early this week. I spoke with a member of the Chamber and they were disappointed that the holiday decorations were not up in time for Small Business Saturday but they were happy to see them at least up now.

Joyce Flinn, VP on The Hoboken Chamber of Commerce is said to have been a leading advocate for these new decorations in addition to the group as a whole. She is the wife of Eugene Flinn who runs the Elysian Cafe and Schnackenburgs restaurants in Hoboken. The Elysian Cafe has a history of doing nice holiday decorations of their own.

Several people I spoke to like the new lights and consider them an improvement over prior years. The next logical question for this watchdog is did these lights cost the whole $50,000? I doubt it so hopefully we will either see more decorations or someone patting themselves on the back for saving money for the City of Hoboken. 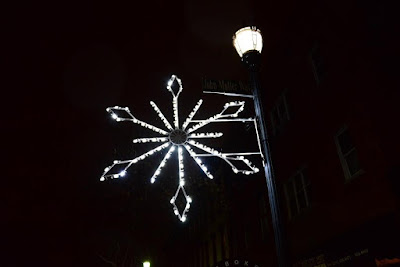 Posted by Hoboken Resistance at 12:19 PM