From the City of Hoboken's Mayor Office... 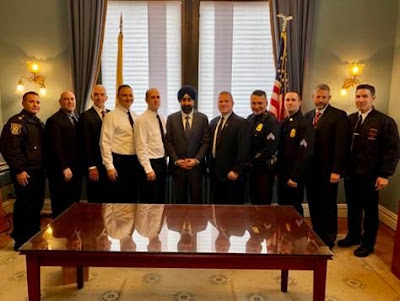 "We can no longer ignore the fact that a small number of establishments are creating a big problem for everyone else in the form of violence, property damage, and financial cost,” said Mayor Ravinder S. Bhalla. “When a person comes from out of town and spits in the face of our officers, as has happened numerous times, that is unacceptable. When an officer is assaulted by an inebriated patron and receives a concussion, as happened to Officer Lombardi on Christmas Eve, I will not allow the status quo to continue.”


"The Mayor’s creation of this task force is not about hurting the bar and restaurant industry in town," said Police Chief Ken Ferrante. "This task force is going to take a deep look into incidents, events, and problem bars that are contributing to a decay of our city's quality of life, causing injuries to our residents, visitors, and police officers, and hurting most of the businesses in town, including a majority of our bars and restaurants. The disruption that SantaCon brought to this great city, its residents, and business owners the week before Christmas and during Hanukkah, just so 10 to 15 percent of our bars can profit, is unacceptable!"

"I fully support this task force as a means to develop policies that protect public safety," said Provisional Fire Chief Brian Crimmins. "I look forward to working with Mayor Bhalla, Chief Ferrante, and community leaders to achieve this goal."

Police Officer and past president of the Hoboken PBA Vincent Lombardi, who suffered a concussion from an assault by an inebriated patron on Christmas Eve, supported the Task Force’s efforts, stating, "The escalation of disorderly and violent behavior by inebriated bar patrons against police officers, of which I am a recent victim, has spawned into a quality of life crisis. I welcome and fully support Mayor Bhalla’s decision in addressing this ugly trend for the sake of officer safety and serenity within our city."

The first step in the Task Force's efforts, based on the recommendation of the Hoboken Fire Department, is to increase the fines levied for overcrowding and other imminent hazards during all high-volume events to the maximum amount permitted by the Uniform Fire Code Statutes and Regulations. Fines for non-compliance will increase to $2,500 for a first offense and $5,000 for subsequent offenses. Additional steps will be taken by the Task Force in the coming weeks.

“At Little City Books we are grateful to Mayor Bhalla for addressing this issue,” said co-owner Kate Jacobs. “On the corner of 1st and Bloomfield, we are surrounded by bars that are generally very good neighbors, keeping our surrounding blocks lively. The ‘Cons,’ however, are severely damaging to the success of our business --  especially SantaCon which occurs on a Saturday before Christmas, a critical day for a low-profit margin business like a bookstore, which should be our most profitable day of the year. On the ‘Con’ days, our staff is harassed and intimidated by drunk people and we have always had to close early, with business down by about 40 percent. Our store is a destination for families with children, and no one brings children into that neighborhood when it is so out of control and vile from morning until night. Curbing the excesses of the ‘Cons’ would be a great thing for our business, for the residents of Hoboken, and for the reputation of the town.”

My comment: This task force should reach out to all restaurants and bars to ensure solutions make sense especially for the bras and restaurants that do not participate in Santa-con or Lepre-con events.
Posted by Hoboken Resistance at 1:02 PM